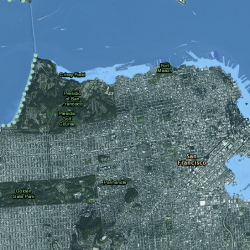 This is first in a series: Behind the Scenes of Heart Wood

“San Franciscans were surprised by water falling from the sky. Most water crept in at them from the sea.”  (Heart Wood, page 5)

I originally wrote the opening scene for Amisha (year 2075) set amidst the rising sea levels propelled by continued climate change. The sea would first encroach San Francisco along the Pacific Ocean side, I imagined, then move eastward and slowly flood the city from the beach, up the avenues and into Golden Gate Park.

According to professional future projections of rising sea levels, salt water is first going to enter San Francisco from the bay side and flood the waterfront piers, Embarcadero, Financial District, and China Basin – areas mainly built on landfill.

I discovered this, thanks to my friend Mark, who sent me websites that project future sea level scenarios – websites used by land use planners as tools to help understand, visualize, and anticipate vulnerabilities to sea level rise and storms.

Try it yourself! Select a map location on these websites and play with various scenarios. California: http://cal-adapt.org/sealevel/ and USA: Sea Level Rise Viewer  https://coast.noaa.gov/slr/

Based on these projections, I moved the rising sea level scenes away from Golden Gate Park near the Pacific Ocean, and in its place, described the park as “a three-mile long tent city that generously houses Oceania’s Pacific Rim immigrants.”

After studying the map projections, I decided the most likely place for Amisha to encounter the encroaching sea was in the San Francisco Bay, across town.  From Heart Wood:

Amisha and Orion walked through the old Financial District while waiting for the ferry to take them across the bay to the Martinez dock.

Amisha felt herself losing ground. “How much longer ’til the ferry?” she asked, reflexively waiting for Nib’s reply, but getting nothing.

“Let’s walk then.” She struggled out of the truck and started down the street toward the old Financial District but didn’t get far. The district, once a vibrant collection of purposeful high-rises, was now a forest of toppled buildings standing like barren tree stumps in a swamp. The street ended abruptly at lapping water. Boats floated in front of each building. When did electric power start failing? If she couldn’t remember on her own, then how was she going to know things now? She reached for Orion’s arm, feeling a queasiness return. She could still stay. He’d cover for her.

“Eight minutes,” Orion said, and guided her back to the truck.

When did the sea invade the ground floors? she wondered, unable to stop thinking about the inevitable. (Page 40)

Are rising sea levels inevitable? With the COVID-19 pandemic and political uncertainties currently sweeping the world, we have so many new, urgent problems, yet in the background, the earth continues to warm; the seas continue to rise.

How does global warming cause sea levels to rise? When I’m faced with a complex situation – more than I can get my head around – I first look for easy-to-understand descriptions and suggestions. Here’s a start:

First, as carbon-dioxide traps more heat on the planet, the oceans get warmer and expand in volume. Second, ice caps in Greenland and Antarctica as well as other glaciers start melting, pouring more water into the oceans. Once these processes get underway, they won’t stop quickly, even if we ceased putting carbon-dioxide into the atmosphere tomorrow. https://www.washingtonpost.com/news/wonk/wp/2012/11/01/can-we-stop-the-seas-from-rising-yes-but-less-than-you-think/

Is it hopeless? In imaginary conversations with my character, Amisha, year 2075, she asks me if I even tried to do anything, or like Harmony, did I give up assuming it’s too big a problem for one person to make a difference? With a little research, I found a list of “Seven things you can do today to reverse sea level rise.”

I decided to start with these:

Check the list yourself – https://www.thebalance.com/sea-level-rise-and-climate-change-4158037  Maybe there’s some things you can commit to as well.

I invite you to browse my website, www.shirleydickard.com, where I will be gathering information and links to issues covered in Heart Wood.