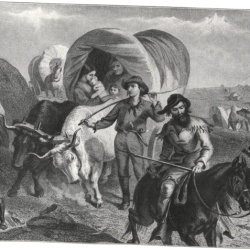 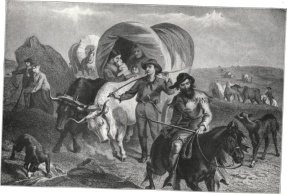 A cherished story in my family is that Great Grandma came to California by covered wagon during the 1849 Gold Rush.  Only she didn’t.  Hard as I try to hold on to the version of my great grandparents making  a tortuous six-month wagon “road trip” from Michigan to California to start  a new life together, the evidence just isn’t there.

Nonetheless, I refuse to be swayed by facts. So what if dusty historical biographies and frayed yellow obituaries record that it was actually 1874 when Emily Anna Bacon Hoppin accompanied her new husband, Charles, back to his 800 acre ranch in Yolo, California. She might even have taken the new transcontinental railroad, recently opened in 1869 for all we know.  But inside of me is a small child who won’t release her fingers around a favorite shiny pebble. In my heart, Great Grandmother did come to California by covered wagon during the Gold Rush.

“It’s the storyteller’s right to embellish the story,” my Grandma Dot-Dot once confessed as she spun yet another legendary tale about her mother’s life in the late 1800’s. I interviewed Grandma before she died and transcribed her stories into a book which I gave to the extended family. It was a meritage of memory and facts. From her child’s-eye perspective of early California ranch life, Grandma fashioned her mother into a larger-than-life figure who was not to be reckoned with. “Emily Hoppin was known as a woman who stood by her principles,” Grandma told us. “Why she and her women friends threatened to close down the local saloons so many times, they were known as the Three Musketeers. Grandma delighted in planting family stories into our fertile imaginations. She was our myth-maker.

I learned from Grandma Dot-Dot that stories are more important than facts.  Stories nurture the heart; facts languish in the head.  This is why I describe the novel I’m working on as part historical fiction, part memoir, and part future-fantasy. Despite my struggle to be historically accurate, I’m finding that the family’s mythology is much more enduring.

In my next blog, I’ll describe my discovery of an historical detail while traveling through the Nevada desert – a fact that somehow never made it into the family’s records or mythology.

© All materials copyright Shirley DicKard, 2015, except as otherwise noted. 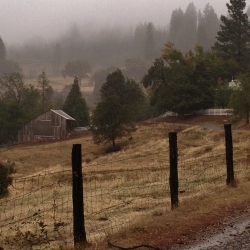 As I turned off Highway 49 onto Pendola Road, traveling to the Skyline Harvest Retreat Center, it was like traveling through time.  I followed what was once a narrow dirt road that early Gold Rush settlers had carved from the hills,  scanning the downslope for vestiges of old mines and water ditches while staying alert for on-coming cars around the many blind curves.   Further along, the woods opened up into the pastoral Pendola Ranch  – where hillsides were once covered with vineyards until Prohibition stepped in and hacked the copper stills to pieces.

Passing through the gate to Skyline Harvest 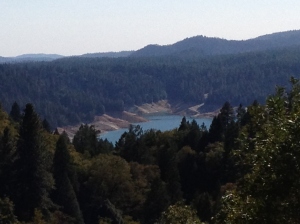 Bullards Bar Reservoir is to my left.

I settle into The Hermitage.  It’s too perfect! 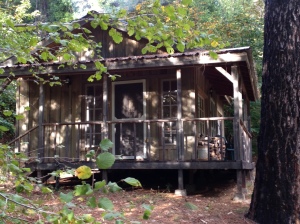 A corner table for eating and writing, a futon couch, meditation chair and kitchen fill up the main room.  The single bed is in an alcove tucked behind a folding wooden screen, and a modern bathroom with shower is in a separate room. Two chairs wait on the deck for watching wildlife in the small clearing outside.

I plunge ahead, not knowing where my story is going next. Though I know the general arc of my novel, The Desk, (Note: “The Desk” was the former working title for “Heart Wood” before 2020), I’ve learned to quiet my mind with meditation before starting, then have faith that the characters will surprise me.  And they do. Like today, Hummer appeared.  I’m mid-way through the future section – Year 2088 – my prospective  great-granddaughter Amisha’s story of struggling to survive on a planet irreparably damaged by man’s impact.   Hummer and his woman, Rapalini are one of the old folks who fled to the hills early on.  What do they know?

3:30 PM.  I’m startled by a knock on the door. It’s Diane Pendola who (along with Teresa Hahn) founded and is Director of Skyline Harvest.  I’ve asked for some of her time to help me think  things through – drawing on her experience with indigenous wisdom, Gestalt Therapy, theology, The Enneagram and her mentors, Ramon Panikar, Thomas Berry, Brian Swimme, to name a few.

I’m interested in the questions raised in my story –  not so much the answers.  Diane asks if mankind can move  from an era that’s been shaped by man’s ability to circumvent the natural checks and balances of nature,  into one that recognizes that we are part of a universal consciousness? If not, what kind of world will Amisha live in?  That’s where my story goes.

We jump up two hours later – time has flown into the dinner hour.  Diane departs, and I take a cool walk along the firebreak road to watch the golden sun set into the departing clouds.

A fox scurries past as I return to The Hermitage and prepare my dinner, heating with the wood stove instead of the gas range.  My gourmet husband has sent me here with a chicken cacciatora, a beef stew, garden salad, and a bottle of red wine.  He’s amazing and I’m so lucky!

But my cello also calls me.  I unzip its case intending to practice a few scales, but  instead, I  play for an hour – improvising in  C minor harmonic – a moody, searching key. Crickets add a chirping accompaniment, though I’m too tired to see if there’s any correlation with my playing.

Do we have the ability to influence our ancestors?  Or our future descendants?  On a restless night several years ago, I found these thoughts changing the course of my novel.

I started out inspired to write about my Great Grandmother Emily who settled during the 1849 Gold Rush in the Sacramento Valley.   But I didn’t want to write yet another biography of a head-strong, determined western woman.  The book shelf’s already full of those!  So I stepped back to look at the larger landscape.

Of course…we’re all spirit, and if time transcends the here and now, we all have access to each other’s lives.  What if I could slip back into my great-grandmother’s life and tell her what she’d need to know that might ward off future ecological devastation?  Or hear my great-granddaughter imploring me to build now what she’d need to survive when she returns to our abandoned homestead in the far future?

And what if we’re all connected by the vision of an ancient woman of wisdom who saw it all?  Shima’a found a portal that transcended time.  From the heartwood of an oak tree (that as an acorn grew from her heart when she died), a small oak writing desk became her means of inspiring women to gather their power and create new ways of living together. The old, aggressive masculine constructs have run their course. If earth and humanity are to survive, the feminine has to ascend.

It’s five in the morning and this is my first entry.  It’s also the dark of night, my best time for writing.  Like slipping between the covers of dreamtime and daylight – a very thin space where the two relax into each other and birth words that neither could have done alone.

What will you find on these pages?  You’re probably as curious as I am.  If you know me personally, you may have come here as a friend to touch base, see what’s up.  Or you may be someone who’s heard about my novel-in-progress, The Desk, or have read sections from it and return to feel its texture.  I was approached recently by two casual acquaintances who asked when the book would be ready.  They wanted to read more.  Derelyn and Michelle, this blog’s for you!

I anticipate this blog will be my way of telling a fuller story.  Originally, my novel was just that – a historical fantasy of what it might have been like to have lived my Great-Grandmother Emily Hoppin’s life.  Though I never met her, she’s my family heroine – arriving in California soon after the 1849 Gold Rush, settling in the small farming town of Yolo near Sacramento.  Emily was widely known as a woman of principal whose articulate words, both written and spoken, influenced the future of women and the land in turn-of-the-century California.  I have her scrapbook filled with speeches and newspaper articles about her.   I feel her in my blood.

In future blogs, I’ll describe how her personal life morphed into a fictional story, then morphed again into a fantasy that spans three generations of women, all interconnected by a secret held within the family desk.  Present, past and future, if you will.

This blog is my three-dimensional tic-tac-toe game where I can play with time, history (real and imagined) and see the world as it could be.

If you’re interested in History, there will be  sections on early California.  Geneology?  I’ll post what I have about the real lives my book is based on. California Landscape:  I’ll have photos and descriptions of nature’s wonders and their changes over time.  Concern for the Future:  I’ll not only describe my own impressions, but will link to other projections of where the earth is headed based on our past and current practices.  Collective Power of the Feminine: Here’s a place where I take heart that the growing bonds of feminine (not just women’s) energy will bring a powerful caring and protection for our earth.   And last, Creative Writing.  I’ll include sections of The Desk and write about how I pull all this together.

I’m looking forward to your feedback – tell me what works for you, suggest nooks and crannies to explore, share your own thinking and keep me moving forward!