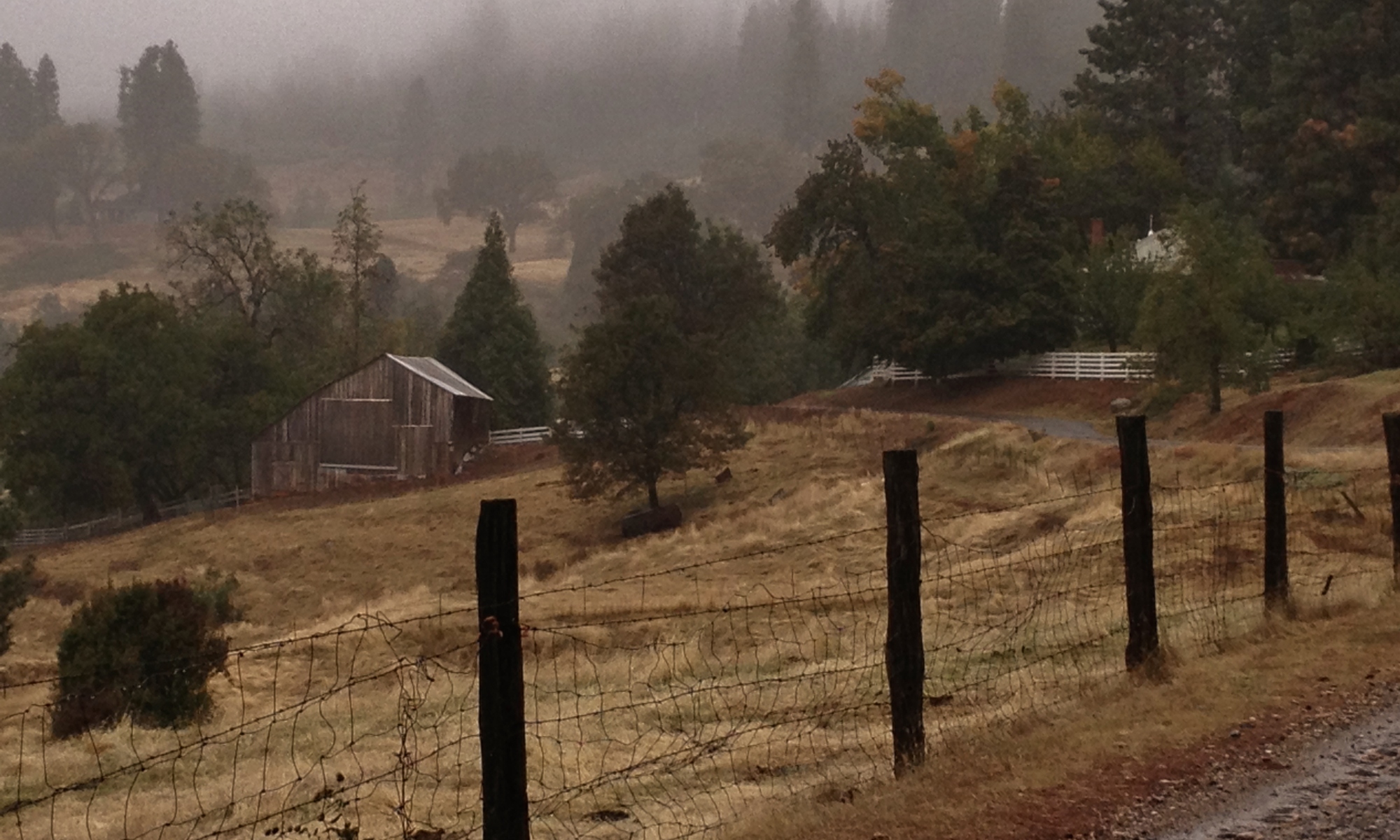 As I turned off Highway 49 onto Pendola Road, traveling to the Skyline Harvest Retreat Center, it was like traveling through time.  I followed what was once a narrow dirt road that early Gold Rush settlers had carved from the hills,  scanning the downslope for vestiges of old mines and water ditches while staying alert for on-coming cars around the many blind curves.   Further along, the woods opened up into the pastoral Pendola Ranch  – where hillsides were once covered with vineyards until Prohibition stepped in and hacked the copper stills to pieces.

Passing through the gate to Skyline Harvest

Bullards Bar Reservoir is to my left.

I settle into The Hermitage.  It’s too perfect!

A corner table for eating and writing, a futon couch, meditation chair and kitchen fill up the main room.  The single bed is in an alcove tucked behind a folding wooden screen, and a modern bathroom with shower is in a separate room. Two chairs wait on the deck for watching wildlife in the small clearing outside.

I plunge ahead, not knowing where my story is going next. Though I know the general arc of my novel, The Desk, (Note: “The Desk” was the former working title for “Heart Wood” before 2020), I’ve learned to quiet my mind with meditation before starting, then have faith that the characters will surprise me.  And they do. Like today, Hummer appeared.  I’m mid-way through the future section – Year 2088 – my prospective  great-granddaughter Amisha’s story of struggling to survive on a planet irreparably damaged by man’s impact.   Hummer and his woman, Rapalini are one of the old folks who fled to the hills early on.  What do they know?

3:30 PM.  I’m startled by a knock on the door. It’s Diane Pendola who (along with Teresa Hahn) founded and is Director of Skyline Harvest.  I’ve asked for some of her time to help me think  things through – drawing on her experience with indigenous wisdom, Gestalt Therapy, theology, The Enneagram and her mentors, Ramon Panikar, Thomas Berry, Brian Swimme, to name a few.

I’m interested in the questions raised in my story –  not so much the answers.  Diane asks if mankind can move  from an era that’s been shaped by man’s ability to circumvent the natural checks and balances of nature,  into one that recognizes that we are part of a universal consciousness? If not, what kind of world will Amisha live in?  That’s where my story goes.

We jump up two hours later – time has flown into the dinner hour.  Diane departs, and I take a cool walk along the firebreak road to watch the golden sun set into the departing clouds.

A fox scurries past as I return to The Hermitage and prepare my dinner, heating with the wood stove instead of the gas range.  My gourmet husband has sent me here with a chicken cacciatora, a beef stew, garden salad, and a bottle of red wine.  He’s amazing and I’m so lucky!

But my cello also calls me.  I unzip its case intending to practice a few scales, but  instead, I  play for an hour – improvising in  C minor harmonic – a moody, searching key. Crickets add a chirping accompaniment, though I’m too tired to see if there’s any correlation with my playing.